I'm a keen emoji user. I love how emojis can be used as emotional punctuation.

The way an emoji appears is critical to its interpretation.

The actual mechanics of this in practice are actually quite interesting and can be seen with this snippet:

This system font stack shows how font fallbacks are typically implemented on a character by character context; when a glyph is not defined in a font for a specific character, it will instead fall back to the first font below it in the font stack that contains that character.

When loading this CSS on a web page in a browser on MacOS, the text "Hello" will use the default Apple system font (as time of writing, SF Pro).

SF Pro does not necessarily contain emoji glyphs and so it will fall back to Apple Color Emoji when showing emoji.

The key lesson to be learnt here, is that different fonts (and therefore different devices) will show emojis differently. Apple, Google and Twitter (and many other large tech companies) have their own emoji fonts.

Indeed - sometimes these discrepancies are enough to cause confusion in the communication. One close to my heart is the hot beverage emoji: 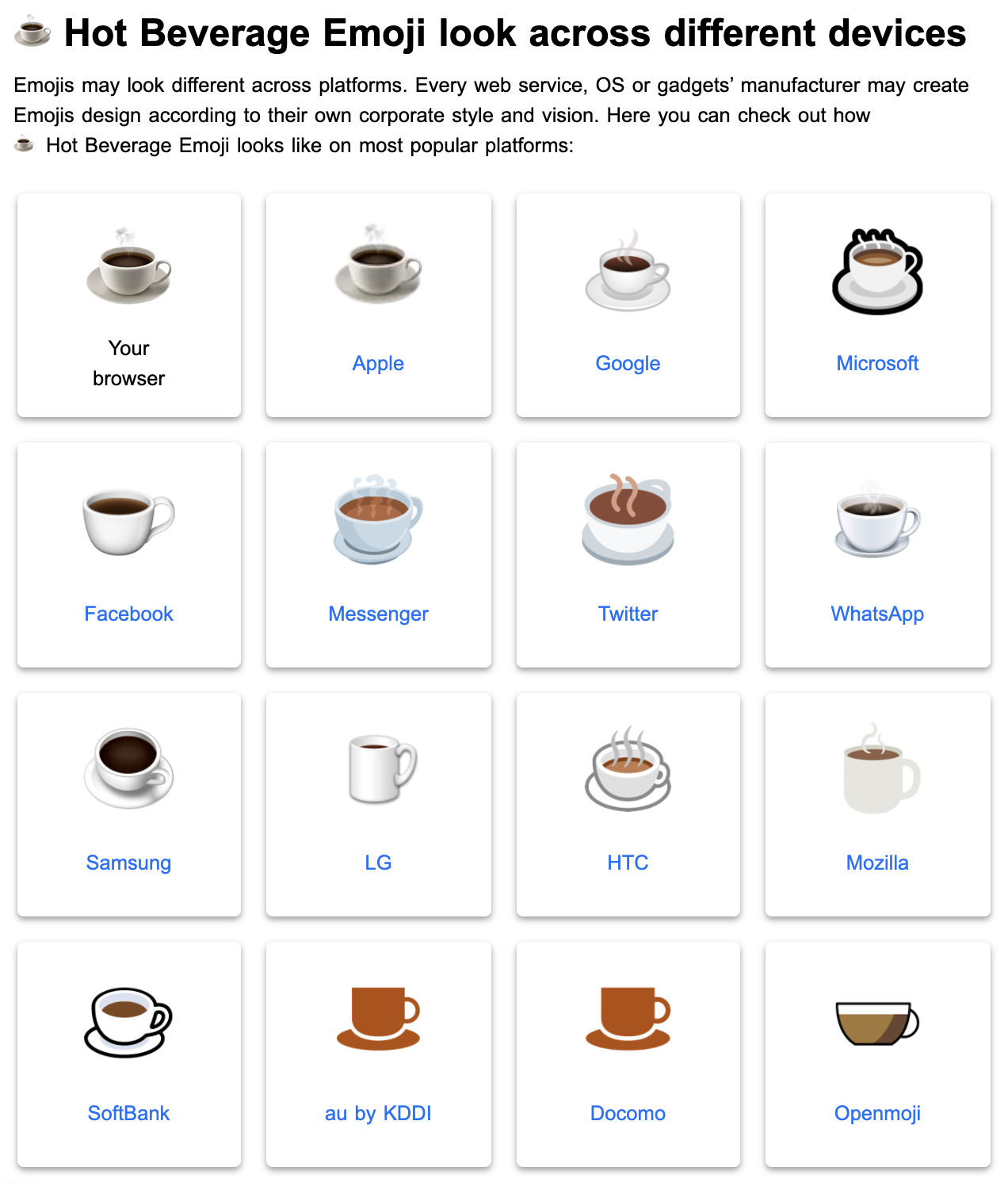 History suggests that some people may actually be offended by condemnation of their preferred hot beverage. Wild.

Here, the Apple, Google, Facebook, WhatsApp and Samsung emojis are so dark they could not realistically be a cup of tea.

My conjecture is that those emojis are less frequently used to convey tea as a result in the UK and other tea drinking nations; especially on platforms that use darker hot beverage emoji images.

I haven't sourced data for other social networks yet, but for Twitter, which uses a pretty moderate shade (light for coffee, dark for tea), I found that 204 tweets from the UK and Ireland (per 100000) contained a hot beverage emoji, compared to 71 for tweets from the US. This may provide a good benchmark. [Data source]

As much as the "hot beverage effect" is not likely to turn the world into anarchy any time soon - it does demonstrate at minimum the leeway that emoji fonts have.

Here's a paper showing some other examples of this effect: https://www-users.cs.umn.edu/~bhecht/publications/ICWSM2016_emoji.pdf

It seems apparent that different choices of emoji, and different presentation of those emoji, can cause different (emotional) responses.

Given that emotional responses are often enough to swing political opinion and votes, it seems plausible that bad actors (Home Alone 2 comes to mind) may attempt to use this leeway to push their agendas. I propose the name Emoji gerrymandering.

For instance, an emoji of a man with brown skin with a beard may be emotionally interpreted very differently to a younger looking man without a beard in some parts of the world.

It is then concerning to me that the main emojis are created by large companies, most of which whom exchange great amounts of information with the NSA, as revealed by whistleblower Edward Snowden. There's some Epstein suicide levels of skepticism around the sudden emergence of smart home technology; Google's smart speakers are such a suspiciously low price that you might imagine they'd have to be getting some money from somewhere to get the price down.

It - to me - is not completely beyond imagination that pressure may be put on these companies to use convenient emoji presentations.

Aside from a concerning amount of flexibility in emoji design, the Unicode consortium has made some very naive decisions.

What the UK needs